Percutaneous discectomy or nucleotomy is a new method used to remove the herniated discs of the spine both at lumbar and cervical, without needfor surgery unlike the classical so far. The method consists in performing with the patient awake and under local anesthesia with sedation, a lateral opening of the intervertebral disc hernia that has special instruments with maximum thickness of 4 mm and extracting the contents of the hernia with decreasing the pressure inside the damaged disc with the consequent disappearance of pain.

Importantly disectomy method does not replace traditional surgery for herniated discs, is another method that could avoid surgery, and should be used when a well conducted medical treatment or rehabilitation have failed and with no all herniated discs can be eliminated by this method, the broken discs or patients with neurological deficits should not be treated by this method.

This new method appears in the absence of security of a good outcome of surgery for herniated disk classic (laminectomy), in which 40% of the patients had some kind of post and of those 40% one makes a not insignificant percentage fibrosis Postoperative (faulty internal scar that will compress even more than before the nerves were compressed by the herniated disk) whose consequences are very lamentable and functional.

A disk being addressed:

We must say that although the world are few who perform this technique, the future shows a significant extension of this method and other methods of endoscopic spine, which represent minimal aggression to the patient. There are 3 ways to perform disectomy and all are made with the patient awake and only under local anesthesia with sedation (the first general anesthesia is contraindicated because the patient together with the doctor telling you the type of pain that feels as this will appear in the course of the intervention and how it fades until it disappears completely at the end of the procedure).

It consists of a device that consists of a console connected to a series of hoses and equipment are introduced into the intervertebral space and an aspiring effect in the center of disc, thus reducing intradiscal pressure. This method is relatively complex and expensive, because each kit is disposable automatic percutaneous discectomy and its cost exceeds $ 1,500. Percutaneous discectomy technique can not be used for all types of disk herniation because if the disc is hard and calcified fibrous or it's not make any improvement.

Advantages of this method

Percutaneous discectomy offers many advantages over other techniques. Here are some: 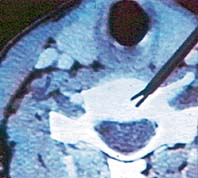 With this new method, without being hospitalized patient gets a date for a specific day in the morning, without hospitalization and at night will be at home, being able to reintegrate to work in a few days. All this and more makes the Percutaneous Discectomy is a method with many advantages and truly revolutionary.