This new method appears in the absence of security of a good outcome of surgery for herniated disk classic (laminectomy), in which 40% of the patients had some kind of post and of those 40% one makes a not insignificant percentage fibrosis Postoperative (faulty internal scar that will compress even more than before the nerves were compressed by the herniated disk) whose consequences are very lamentable and functional. 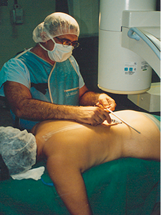 History of percutaneous nucleotomy disectomy or goes back to the '80s when a Japanese name Hijikata publishes first attempt percutaneous approach of an intervertebral disc 1987 Monteiro, from Belgium, presented at a series of 6 Philadelphia nucleotomies made by himself with some instruments he makes, then that date in Switzerland, Professor Schreiber begins experimenting with this method to refine the instruments and manufacturing other can be placed within the spine to see all content on a TV, Dr. Schreiber was elected In December 1994 President of the Association of Percutaneous Nucleotomy "also called" Inter-rachis Gieda (international group for the study of surgical approaches to the axis) congress held in Paris-France during the month of December every year under the able leadership of Dr.Daniel Gastambide.